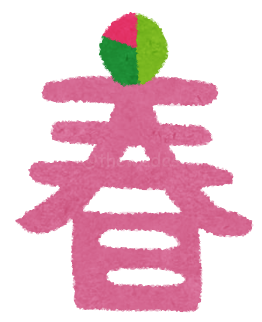 Hi there. It’s Mr. Wada back on duty. I would like to share Japanese spring songs this time. Aside from Sakura songs that I’ve previously introduced, there are a bunch of spring songs still. Here goes.

One of standard songs from music class. Sumidagawa is a river running in Tokyo.

A classic song. I am sure I sang it in a music class.

A popular trio from the 70’s. Catchy & pop. I actually like this melody a lot. Very kayokyoku

A big hit from the 80’s by an idol singer. It is about farewell, I think.

Another idol singer form the 80’s (she seems more calm and mature). This minor melody sounds quite kayokyoku for me.

It was a theme song of one of NHK’s drama series called also Haru yo Koi. The piano phrase is unforgettable.

A semi-hit song from 2004. I didn’t think it’d last long but I still hear it from TV sometime.

It’s interesting to list up spring songs like this and see differences between oldies and today’s music. Well, new stuff isn’t always better huh? Hope you find it cool.